Tag Archive for: Bassett Optimistic ahead of 2017 season 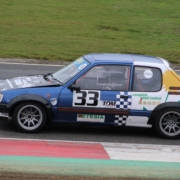 Bassett Optimistic ahead of 2017 season. Chris Bassett travels to Snetterton in Norfolk to begin his fourth consecutive season in the Peugeot 205 GTi later this month (25 march) and is cautiously optimistic, despite a change in race series from the BARC South East Cannons Tin Top Championship to the Track Attack JustMotorsportAds.com Tricolore trophy series.
That is not the only change for 2017. The new season signals the era of a new beginning with various upgrades to the Peugeot over the winter and new race sponsors in Spoox Motorsport.
The car itself was sent up to Spoox Motorsport’s base in Leicester shortly after the last race in 2016 and spent a few months in their workshop for Darren and Ben to go through everything from top to bottom and suggest upgrades to be made in readiness for the new season. A new braking set-up, suspension upgrades – both front and rear, new diff set-up and general set-up work to try and eek a little more time from the car were made before our testing schedule at our local track at Brands Hatch.

It was a great testing session which allowed us to test all of the new upgrades and get some valuable miles under our belt before the start of the new season – in fact we were able to complete six race distances and were also able to fit a passenger seat so that others could experience the track.
From Brands hatch, the car then went up to Chappell Coackworks for a new body kit and respray to look fresh for the new season, before heading ‘home’ to Tom Motorsport for the final set-up work and corner weight ahead of the first race.
Drawing inspiration from iconic motorsport corners such as Monza’s Parabolica and the Montreal Hairpin, the Snetterton 300 circuit hosts the highly anticipated 2017 season-opener.
As always, we are eager to get the new racing season underway and are looking forward to racing against new drivers and visiting new tracks – it will certainly be a new challenge from racing at Brands hatch every race!
The car feels quick, the balance feels good, the brakes are working well, the engine feels really strong and you can really feel the car working well. Spoox Motorsport along with Tom Motorsport have both done a great job over the winter to get to where we are now. I’m really looking forward to learning all of the new tracks and seeing where we finish – it’s been a long winter, but now we are raring to go!
Our 2017 race partners are:
Etesia UK
Fusion Media
Spoox Motorsport
Tom Motorsport
Keep up-to-date with all our racing activities by following us on:
Twitter
Facebook
Instagram