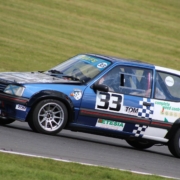 There were collisions, controversy and a whole lot of drama during the BARC SE Tin Tops race at Brands Hatch (30 May).
To be honest, it was shaping up to be a disappointing weekend following the highs of the previous two rounds which saw us gain two outright wins. We struggled for pace throughout qualifying having only managed one clear lap with thirty cars on track. In the end we qualified third for the opening race, but was around eight tenths of a second slower than we have been in the past.
Tom Motorsport who usually prepare the car and attend our race meetings weren’t available for this weekend so race duties fell on Ian Deasy and Lewis Judd – a massive thank you to both of them for their help.
So we lined up in third for race one. The race begun with us in hot pursuit of the two pace setting Honda’s of Chris Whiteman (Civic Type R) and Rod Birley (Integra) with the Vauxhall Astra VXR of Peter Osborne never more than a few tenths of a second behind. Over the next two laps Osborne was able to power past on the main straight but we were able to regain the position under braking going into Paddock Hill bend.
On the next lap going up the hill towards Druids; Whiteman covered the inside line as Birley closed under braking, with us braking even later causing a concertina effect. Bumpers clashed front and rear with Whiteman’s Honda spinning out the way and down to twelfth place. Birley emerged in the lead with us literally glued to his tail, as Osborne fell further behind.
Over the remaining laps we gave chase to Birley’s Honda – never more than a second behind, but couldn’t do anything more – the two of us are very evenly matched over the course of a lap with both of us have stronger points than the other on different parts of the circuit. After the first race, a quick look at the lap times saw us again around a second off the race pace we are capable of, but with no clue as to why this was the case. Still, a second place finish was a decent result given the circumstances.

The race was stopped prematurely. Again opinions will differ but it appears as though Chris Bicknell spun his Citroen Saxo coming out of Druids and although he tried to get going he was collected by an unsighted Russell Turner and Terry Waller. Les Beer was involved in the melee, which was very unfortunate as all four cars were badly damaged.
After the race, race officials deemed that I had played a part in Whiteman spinning out of the way and both myself and Rod Birley gained two endorsement points on our race licences. No further action was deemed necessary. I contemplated appealing the decision as I felt it was wrong, but after discussions with a number of people decided against it.
Race two saw us start on the outside of Birley in second position. We slotted in behind of the Honda with Osborne in third place and Whiteman up to fourth by the end of lap one. Again the four of us set the pace as Whiteman moved up to second on lap three demoting us down into third. Osborne was able to slip past and up into third. Whiteman dived past Birley and took the lead. Osborne then powered past Birley to move into second. Birley retook the position going into Druids but Osborne made another move along Copper Straight and going into Surtees. Contact was made between the two spinning Birley out. We had to take avoiding action across the grass losing time and a place to Daniel Fisher’s Honda Civic Type R.   Fisher then made contact with Osborne going into Paddock Hill Bend and pulled off the circuit, allowing us up into third.
Whiteman was by this point nearly four seconds down the road and easily able to control the race. And so it finished, with Whiteman winning, Osborne second and us in third, but finishing second in class. Again, race pace eluded us and a look at the times saw us around a second off the pace, so two seconds in class was a solid result and actually enabled us to increase our lead in the class championship.
We should hopefully have an update on the Peugeot for the next race which will hopefully make us a little quicker and we will be looking for reasons for our lack of race pace a little closer to find out why we were around a second off over the course of a lap.
Rounds seven and eight sees us return to Brands Hatch on 25 and 26 June.
Keep up-to-date with all our racing activities by following us on:
Twitter
Facebook
Instagram