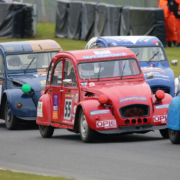 When someone mentioned to me that we would like to get you involved in an endurance race in a few weeks – are you up for it? The first thing that came to mind is that it might be a sports prototype, like you see rocketing down the Mulsanne straight at Le Mans, or perhaps a Porsche 911.
I must admit, that was certainly my first thought when asked if I wanted to compete in a 24 hour race at Anglesey in wales. I most certainly wasn’t thinking it would involve a Citroen 2CV!
So there you have it, four of us bought into the idea of a bit of fun, got the car and are heading to Wales this weekend.

Being designed in France in the 1940’s, the 2CV is simple to work on, lightweight, and parts are commonly available and cheap. Body panels easily remove with just a few bolts, and doors come off by opening them fully and lifting them off the hinges. Due to obscure tax rules in the 1940’s, the 2CV was fitted with low a capacity engine which is light enough to be lifted by just one person! During a 24 hour race, many things can fail or be damaged, so it’s very useful to be able to change them quickly and easily.
For a lot of drivers, endurance racing is more ‘civilised’ than ordinary 15-20 minute sprint racing – there’s usually a lot more care taken to preserve the cars, avoiding damage rather than crashing into each other at the first corner of lap 1 – more time spent out of the pits, the better. That’s not to say the racing has to be any less intense – it’s quite the norm for cars to be coming into a corner 2 or 3-abreast, after slipstreaming each other down the straight.
So our journey began a few weeks ago when the four drivers involved (myself, Tom Burgess from Tom Motorsport, Phil Jose and Andy Johnson) took the car for a shakedown test at Brands Hatch.

The hardest thing about driving the 2CV is the gear change (it feels so unnatural) – the gear stick is mounted on the dashboard and changing gear can only be described like opening an umbrella. It’s a sideways movement rather than a standard ‘H pattern’ – you rotate the stick down and pull back for 1st gear, release to middle and in for 2nd, middle and out for 3rd, and finally rotate up and in for 4th. There’s no 5th! The second thing to get to grips with is the commitment you need during the corners. Where you would normally think about braking and changing down gears in a ‘normal’ race car, you remain flat and still accelerating! It took a few laps to get to grips with the car, but it was surprisingly easy to drive and well set-up – it was probably the most fun and enjoyable cars I’ve driven around a circuit. Keeping speed going into and coming out of corners will be key to setting a decent lap time as the horsepower of the engine is so low. I think it suits my driving style so it will be interesting to see what the race holds.

2CV racing cars have been driven by a wide range of people with varying experience from professional drivers to complete novices, and a team from the BBC TV programme Top Gear tried their hand in a 24-hour race (including The Stig). The professional drivers include Alan Gow (Series Director of the British Touring Car Championship), Paddy Hopkirk (winner of the 1964 Monte Carlo Rally in a Mini Cooper S), Eugene O’Brian (BTCC), Ed McDonough, Phil Bennett (BTCC), and Carl Breeze (BTCC/Porsche cup). Other drivers include Mike Lindup – keyboard player from pop group Level 42, who has quite a passion for motor racing. After racing a 2CV in a one-hour endurance event, British Touring car driver Ian Flux was quoted as saying; “The Touring Cars Championship would kill for racing like this”.
Not many drivers can boast about having competed in a 24 hour race, without entering Le Mans and I’m certainly looking forward to the event!
A big thank you to my race sponsors Complete Ice Control, Complete Weed Control, Etesia UK, Fusion Media.
Keep up-to-date with all our racing activities by following us on:
Twitter
Facebook
Instagram