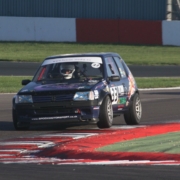 Spoox Motorsport driver Chris Bassett heads to his home circuit Brands Hatch, for rounds 13 and 14 of the BARC SE Tin Tops on 27 October.
It’s been three seasons since Chris competed in the Tin Top Championship following his switch to the Track Attack Tricolore Trophy – a championship dedicated to French cars, but as the championship ended at the end of September, the opportunity to race at the end of the season Tin Top races was too good to turn down.

“I’m looking forward to returning to the championship where it all began for us nearly seven years ago. The biggest challenge will again be the Honda Civic’s we were competing against three years ago – who are still the front runners in the championship. We know the circuit well and are still hopeful of mixing it at the sharp end and are targeting some strong podium finishes,” said Chris.
Over the past three seasons, the blue Peugeot 205 GTi has undergone an extensive development programme which has seen some impressive results. “The balance and power seems strong and we appear to be capable of mixing it with most cars so we are hopeful, with some reliability, we should achieve some good results this weekend.
“One thing is for certain – the team and I will be going flat out to do the best job we can and I’m looking forward to returning to where it all began.”
Our 2018 race partners are:
Etesia UK
Fusion Media
Spoox Motorsport
Tom Motorsport
Rock Oil
Sygnature Workwear
Keep up-to-date with all our racing activities by following us on:
Twitter
Facebook
Instagram