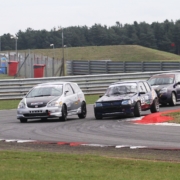 Two Podiums for Bassett at Snetterton. Chris Bassett came away with two third places overall and two class wins at rounds eleven and twelve of the Track Attack Tricolore Championship at Snetterton on 12 August.
Following the wash-out of Silverstone two weeks befo and a strong showing where we were battling for the overall lead, we were hoping for some more wet weather. Unfortunately, it never materialised, although it was nice to be back at a track which we actually knew and had shown strong pace previously.
We ended qualifying in seventh place overall, fourth in Tricolore and first in class, which to be honest I was a little disappointed with. We tried a new set-up which didn’t realy work and we couldn’t get enough grip on the rear end, which was constantly trying to overtake the front. as the lights went out to signal the start of the race, we made a bad get awy with too much wheel spin and dropped back three places.

Over the next ten laps were were nose-to-tail with Bob Buckland in his Renault Clio and Alex De Moore in his Honda Civic Type R trading places numerous times each lap. In truth we were probably holding each other up, as De Moore and Buckland powered past on the straights and then us nipping past under braking. Once things settled down a little, we started to catch the Clio’s of Gwinnett and Hunter, who in turn were being held up by Clive Haynesford in his Mazda RX8.
This all came to a close when Hunter dived up the inside of Haynesford and made contact under braking. At this time, I was behind De Moore and Buckland as we approached the slowing Hunter, who was nursing damage from the contact and wheels pointing in opposite directions. As the De Moore and Buckland slowed to overtake Hunter, I was able to sneak in-between all three and emerged in third place overall.

Coming on to the start/finish line to start the last lap, Buckland powered past again. I followed for the rest of the lap and stuck to the bootlid of his Clio, to stay close enough to make a move around the outside of Brundle under braking and back into third place, which is where we finished. Third place overall in the Tricolore Championship and another class win.
Race two and we made a better get-away – hoping to be able to stay with Done Hughes in his Peugeot 306 – race one winner and Gwinnett. Unfortunately, they were just two quick to stay with. I was able to build up enough of a lead around the corners to keep De Moore behind on the straights. As the laps past, we built a gap of around five seconds to De Moore, but inturn was around five seconds behind Gwinnett, so was left in no-man’s land really – too quick for the cars behind but not quick enough to keep with the leading cars infront.

We left Snetterton with lots to ponder ahead of the 2019 season. Maybe a change of championship might be in order to be competitive against similar powered cars. We won’t be making any decisions until later in the year, but have lots of options to consider.
Rounds thirteen and fourteen will be on 2 September at Mallory Park.
Our 2018 race partners are:
Etesia UK
Fusion Media
Spoox Motorsport
Tom Motorsport
Rock Oil
Sygnature Workwear
Keep up-to-date with all our racing activities by following us on:
Twitter
Facebook
Instagram