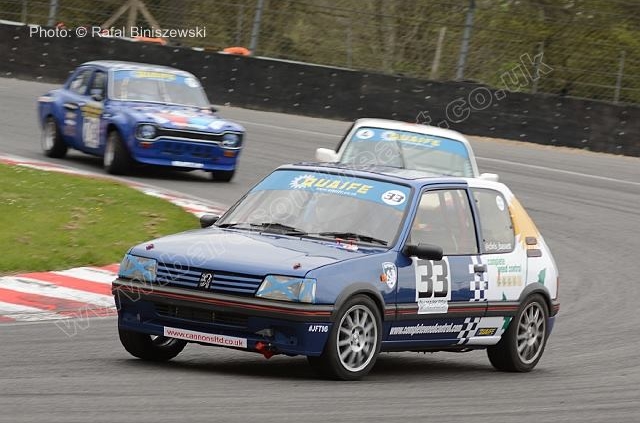 Chris Bassett was the toast of Brands Hatch after two incredible drives in rounds 7 and 8 of the BARC Cannons Tin Tops Championship saw him achieve a breakthrough maiden podium in his Peugeot 205 GTI at the Brands Hatch Indy circuit on 26 May.
Everything finally came together for Chris in both races after a poor qualifying session race in wet weather. A poor choice of tyres saw him qualify back in 12th, yet after just three laps he was in the top six.

In front of a packed crowd who also cam to see the Masters historic festival, the Brit charged through the field, focused on making his way up to the front of the field in his blue Peugeot 205 GTi which also featured new sponsor Complete Ice Control.
With just two laps to go, the former karting Champion was up to second before being held up by a back-marker which allowed a charging Terry Searles in his MG ZR through. Searles was then able to fend off Bassett until the chequred flag.
Although disappointment and frustration could clearly be seen on his face, a first podium of the year was well deserved.
Race two saw Chris actually start in his highest of the season so far in third, before a race-long battle with Russell Turner in his Ford Escort MK1.

Both drivers, while moving away from the chasing 5-9 placed cars, were visibly slowing each other in their pursuit of Searles and Vic Hope in the leading Honda Civic Type R, and were swapping places each and every lap until they made contact with only 4 laps remaining. While both drivers were able to rejoin the track and finish 3rd and 4th, they finished the race almost 20 seconds being Searles and Hope.
“I am so happy to get our first podium here at my local track at Brands Hatch,” said Chris. “A lot of improvements went into the car, fantastic team work and we were much more competitive with good reliability. The crowd really got into it all, and to be able to do this for the guys on the team really means a lot.
“I am very optimistic for the remaining races of the season, and the visit to Lyyden Hill for the next round, which may play to our strengths.”
For more information on Chris Bassett’s racing activities, please visit the officialwww.chrisbassett.co.uk website, ‘like’ his Facebook page or follow @Chris_Bassett on Twitter.

Bitter Sweet for Bassett at Lydden Hill
Scroll to top